Coding from nursery age: understanding, deciphering and taking action in a digital world

Since the beginning of the new school year in 2019, pupils enrolled in the Principality of Monaco’s schools, from nursery through to lower secondary (collège), have been receiving one hour a week of coding lessons. The addition of this new subject reflects the Prince’s Government’s determination, driven by the #ExtendedMonaco programme, to prepare future generations for the world of tomorrow. 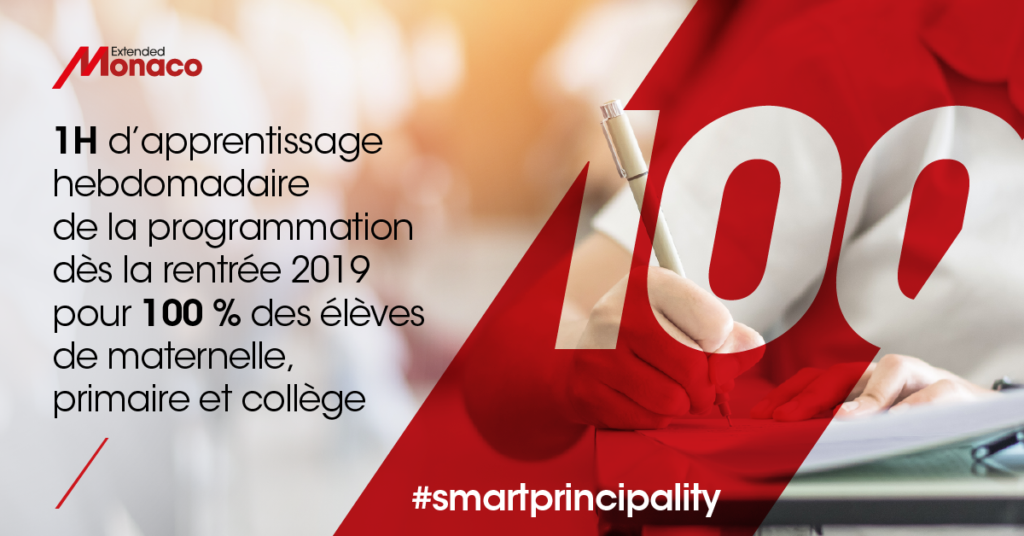 Over the last 20 years, the advent of the Internet has disrupted our society, opening the door to a world of numerous possibilities that are multiplying exponentially. Today, we must prepare children from a very early age to become actors in this change, ensuring that they are no longer limited to being consumers.

Becoming the first country to teach coding to all pupils, from nursery school onwards, is a bet on the future. It is also an initiative that demonstrates the Principality’s desire to develop the ability of its children to use digital tools and applications via an interactive, fun approach.

Learning to code, a new language just like you’d learn the alphabet or a modern language!

The introduction of this new subject is not just about teaching programming languages. It is also an excellent way of developing the skills that will be critical in today’s society: creativity, problem solving, interpersonal communication and teamwork, the ability to adapt and, sometimes, to take risks. In addition, this introduction will also provide an opportunity to put into practice a number of the mathematical and grammatical principles taught in other subjects.

Teachers have received coding training and resources have been made available to help them create lesson content.

From the start of this academic year, all teachers have had access to training modules to help them learn coding via the Monaco Digital Academy, the Monegasque Government’s e-learning platform.

This project was first announced in late 2018: “Monaco, the first country in the world to promote coding from nursery level to Year 10 in all state-run schools, with approaches adapted to meet the needs of each age group.” A promise kept! It is now part of pupils’ everyday lives.

Check out another article on the topic on Monaco Hebdo (French only).

Education is taking a sensible approach to digital transition

Teaching job skills such as coding is a vital foundation. However, providing an introduction to the concept of digital citizenship is another essential aspect for the Government: in other words, helping the Principality’s pupils to understand the limitations and undesirable effects of digital technology.

Nicolas Rodier, a technical advisor at the Department of Education, Youth and Sport, wants to use these initiatives to move pupils from “simply consuming to understanding”.

It’s a message which echoes the view of Ms Isabelle Bonnal, Director of Education, Youth and Sport: “Today, digital is often presented in terms of the divides it provokes: there are those who are ‘for’ it and those who are ‘against’ it. But the digital world is neither a hell nor a paradise. It is a new world which it is up to us to build. The Principality has a huge opportunity to contribute, at its own level, to the advent of the digital era.”

There are some undesirable effects (screen addiction, cyber bullying, fake news, theft of personal data) and it is essential that we support our teaching with work on prevention. This involves developing our young people’s critical thinking skills, helping them to understand how digital tools work.

Implementation of this project is part of a broader vision that aims to transform education, particularly the relationship that Monaco’s pupils and students have with digital technology, and also to strengthen the standing of the Principality, which is already renowned for the excellence of its teaching, on the international stage.


of weekly coding classes (on average)

The country’s highly effective education system, which has a 100% pass rate in the baccalaureate e...

Officially opened on 17 October in the presence of the Sovereign Prince, Edu Lab illustrates the Pri...

Since the beginning of the new school year in 2019, pupils enrolled in the Principality of Monaco’...